Plant Based Protein is a supplement produced by UK based brand, Reflex Nutrition. This supplement is said to help with muscle gain. This review will assess the ingredients listed within this supplement to identify whether these claims can be backed up.

Pea Protein has been shown to have the same effect on muscle mass as whey protein (1). It also contains a healthy amount of iron with a low amount of carbs,fat and sugar; which could be of benefit for people wanting to better control their blood glucose levels, (12).

Derived from yellow split peas the methods of extraction can vary ranging from salt extraction, micellization as well as alkaline extraction among many others, (13). One study found that the protein content of pea protein was higher than soy (14). Despite the positive benefits of Pea protein it has been found to be low in methionine which may need to be supplemented due to liver damage if insufficient,(15).

Rice Protein is extracted from rice flour and has been found to help mostly for post exercise recovery, (16). It does contain lysine, (an amino acid essential for muscle growth), however due to the lower quantity it the effects may occur in the longer term.

No matter what type of protein, all varieties help aid muscle protein synthesis when combined with resistance training (7, 8). Other key features include increasing muscle mass (3), an increase in lean body mass (9) and greater recovery from exercise (10). Longer periods of supplementation have shown greater gains in fat free mass (11).

Sodium chloride is otherwise known as salt. It is theorised that sodium chloride can help prevent cramps as the key mechanism in muscle contraction is the flooding of the action potential in the muscle membrane, and so if there is a sodium deficiency it may cause the muscle to cramp (17).

Cellulose is used as a viscosity modifier or thickener, and to stabilize emulsions in various supplements and other products. It is known for its excellent water retaining capacity.

Bacillus Coagulans is a probiotic meaning that it is a form of good bacteria, Its’ features include heat stability and the ability to survive in the stomach (18). There are several functions of this ingredient including immune stimulation(19, 20) and antimicrobial stimulation (21). In a randomised, double blind, placebo controlled study it was found that it had significant effects for people with rheumatoid arthritis (22), however more research is needed to fully establish this (23).

Lactic acid bacteria is a probiotic. The health benefits of this ingredient includes regulating bowel movement which prevents diarrhea, lowering cholesterol and gives a boost to the immune system (24).

Methylcobalamin is a form of Vitamin B12. Research studies on vitamin B12 have found that it is required for red blood cell production (25), protein synthesis and the repair and maintenance of tissue cells (26).

Plant Based Protein can be used by people who want to gain muscle but who don’t want to consume animal products. This supplement is best taken pre/post-workout. This product has no banned substances in reference to the WADA prohibited list when observing the label / ingredients posted on the website.. 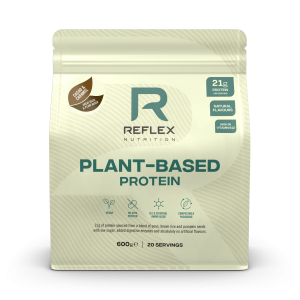