Growth Matrix is a supplement produced by UK based brand, Reflex Nutrition. This supplement is said to help with Muscle Growth and recovery post exercise. This review will assess the ingredients listed within this supplement to identify whether these claims can be backed up.

Whey Protein is the most popular and widely used protein powder. It is derived from milk and is the watery part that separates when making cheese.

Unlike some plant based proteins whey protein has all amino acids so there is no need to find them from different sources. Whey protein is quickly absorbed and used in large amounts by your body immediately If you are lactose intolerant it is recommended not to go for whey protein due to bloating, flatulence, stomach ache or even fatigue.

No matter what type of protein, all varieties help aid muscle protein synthesis when combined with resistance training (3,4). Other key features include increasing muscle mass (5), an increase in lean body mass (6) and greater recovery from exercise (7). Longer periods of supplementation have shown greater gains in fat free mass (8).

Although these benefits are seen, the efficiency and degree of change can differ significantly depending on the availability of the amino acids. Below lists some of the major types of protein powders available. The recommended amount to consume is around 20 – 30 grams, which can be spread throughout the day (e.g 4-6 x 5g).

Leucine is one of several Branched chain amino acids (BCAA’s). It is essential for protein synthesis which is stimulated after exhaustive exercise (9) as well as the critical metabolic process in muscle (10, 11). The metabolic roles of Leucine include energy production and the modulator of muscle protein synthesis via the insulin signalling pathway. There is a reason to suggest that it helps maintenance of muscle mass during weight loss (12). Leucine has also been shown to help in the direct maintenance of glucose homeostasis by improving the redistribution of glucose via the glucose – alanine cycle (13).

Wheat gluten is the main protein of wheat. A desired property of gluten is its ability to bind fat and water while at the same time increasing the protein content (14).

Creatine monohydrate, (CM) is defined as a nitrogenous organic acid that occurs naturally in humans and aids in the supply of energy to cells in the body, (19). The majority of CM, 95%, can be located in the skeletal muscle with the rest distributed to the brain, heart and smooth muscles.

Creatine has been found to increase the replenishment of ATP stores in the skeletal muscles (20). It is attributed to a greater rate of phosphocreatine resynthesis during the rest periods. Higher sprint speeds reported (21). There have been numerous theories proposed as to why creatine is a benefit to short term high intensity exercise (22). One theory is that the increased amount of phosphocreatine, (PCr), can be used as an immediate buffer to ATP which reduces the dependence of glycolysis which delays the production of lactate and hydrogen ions during exercise thus prolonging the activity by delaying the onset of fatigue, (23).

Beta Carotene is a red / orange pigment that is derived from root vegetables such as carrots.

Acesulfame K is a sweetener that is calorie free. This ingredient is used in many products and is used to make the product taste sweeter and does not have any nutritional benefit.

Sodium chloride is otherwise known as salt. It is theorised that sodium chloride can help prevent cramps as the key mechanism in muscle contraction is the flooding of the action potential in the muscle membrane, and so if there is a sodium deficiency it may cause the muscle to cramp (24).

Pyridoxine hydrochloride is a form of Vitamin B6. The active form of vitamin B6 is known as P-L-P (25), which is stimulated by exercise (26). During exercise the body relies on the liver to produce glucose via glycogenolysis, for which vitamin b6 is essential for, and is an integral part of the glycogen phosphorylase enzyme and thus will provide energy to the bodies’ muscles (27).

Growth Matrix can be used by people who want to gain muscle. This supplement is best taken post-workout. This product has no banned substances in reference to the WADA prohibited list when observing the label / ingredients posted on the website.. 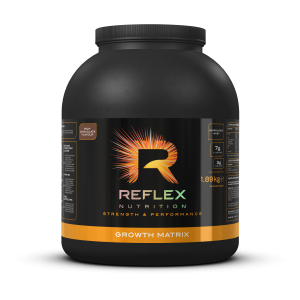