Multi Vitamin Powder is a product from UK based company Protein World. The product claims that it is a great way to boost your daily intake of vitamins and significantly increases the amount and rate at which the vitamins are absorbed. This review will aim to examine these ingredients to see if it can achieve these claims.

Vitamin C is known to be a powerful antioxidant (7). Studies have suggested that it can increase endothelial nitric oxide by protecting it from oxidation and increase synthesis, another function that Vitamin C has suggested includes reducing blood pressure (8), however the only proven function of vitamin C is the prevention of scurvy (9).

Potassium chloride is a form of potassium which has several function such as regulating water balance (10), central nervous system function (11) and helps convert glucose into glycogen which provides energy to the bodies muscles (12).

Vitamin E has several important functions within the body. Firstly it acts as an antioxidant (13) particularly helping with chronic conditions associated with oxidative stress (14), this is due to its functions of being a chain-breaking antioxidant that prevents the propagation of free radical reactions (15) and also helps protect the body’s cell membranes (16). As well as this it can help maintain healthy skin and eyes (17) and gives a boost to the immune system (18).

Zinc has been identified as a factor for many enzymes responsible for the synthesis, storage and release of insulin (19), with increases in lean body mass while fat mass either remains stable or decreases, depending on the degree of baseline zinc deficiency (20). With this evidence is has been shown that this ingredient is important for the growth and development of body tissues as well as this a variety of biological processes including wound healing and muscle cramps (21) have been found.

Ferrous Fumarate is also known as iron sulphate, common uses for this ingredient are for people with iron deficiency. Iron levels have been found to decline due to exercise (22) with findings showing that it can help with fatigue (23).

Vitamin K is also known as Menaquinone. It is sourced from dark green vegetables and is also derived from the bacteria within the intestines. The benefits of vitamin K include increased bone density (24,25). Cardiovascular health is another benefit of Vitamin K which reduces the stiffness of arteries which can improve circulation (26,27). There are other suggested benefits of vitamin k which include anti cancer properties and improved insulin sensitivity (28,29). Vitamin K has also been found to work well when taken with vitamin D (30,31).  Vitamin K is a fat soluble vitamin and so should be taken with a meal containing fat or a supplement that includes fatty acids.

Manganese Gluconate is a nutrient which is stored in the liver, kidneys, pancreas and bones. There are several roles that Manganese Gluconate plays within the body, which includes antioxidant (32), the metabolism of carbohydrates (33), helps form and maintain bones (34) and the production of collagen (35). Caution is needed when taking this ingredient however as too much of manganese gluconate can be harmful (36).

Molybdenum Chelate is an essential mineral that is normally found in grains and water. This mineral is needed for the function of certain enzymes, however there has been no evidence that an increased intake of Molybdenum Chelate provides any benefits.

Nicotinamide is also known as niacin or vitamin B3 and in an antioxidant. Research studies have shown that niacin supplementation increases growth hormones in response to anaerobic exercise (37) as well as a reduction in fasting triglycerides (38). An increase in fasting insulin has been found due to a decrease in insulin sensitivity (39). Further research is needed for this supplement in order to understand the mechanisms.

Beta Carotene is a red / orange pigment that is derived from root vegetables such as carrots. Beta Carotene has been found to convert into Vitamin A (44). Vitamin A is a diverse vitamin that has a wide range of functions. Vision improvement is one positive aspect of vitamin A supplementation (40), another is bone and body growth which can be improved (41). Immune function is boosted by an increase in white blood cells which can destroy harmful bacteria (42). Epithelial cells require Vitamin A in order to function properly, these cells serve as barriers to infection by bacteria and other sources (43). An advantage of Beta Carotene is that the body only converts as much as is required.

Pyridoxine hydrochloride is a form of Vitamin B6. The active form of vitamin B6 is known as P-L-P (45), which is stimulated by exercise (46). During exercise the body relies on the liver to produce glucose via glycogenolysis, for which vitamin b6 is essential for, and is an integral part of the glycogen phosphorylase enzyme and thus will provide energy to the bodies’ muscles (47).

Thiamine is also known as vitamin B1 (48) and is essential in carbohydrate metabolism and oxidation (49). The reported effect that have been found includes, a decrease in heart rate, blood glucose and lactate concentrations (50).

Riboflavin is a nutrient that has been found to help in fat metabolism via the electron-transport chain (51) and an antioxidant (52). It is also one of many nutrients that helps in the production of red blood cells. Levels of riboflavin has been found to diminish during exhaustive exercise (53).

Cholecalciferol is a form of Vitamin D and helps with the absorption of calcium in the stomach (60). Calcium is a vital part of dietary consumption in order to aid growth and maintenance of bones (54). Other important benefits of calcium include helping blood clotting (55), heart contractions (56), lungs (57) and muscles to function properly (58), this is due to calcium binding with phosphate to create calcium phosphate (59).

Cyanocobalamin is also known as Vitamin B12. Research studies on vitamin B12 have found that it is required for red blood cell production (61), protein synthesis and the repair and maintenance of tissue cells (62).

Chromium picolinate is stored in the liver. It has been found to increase the absorption of vitamin C and Niacin (63, 64) as well as enhancing the role of insulin which is responsible for the metabolism of fats, carbohydrates and protein (65).

Folic acid is also known as folate is a water soluble mineral that, along with other nutrients is necessary for red blood cell production (66). It can also help regulate nitric oxide levels in the blood (67).

Potassium iodide is known as a thyroid mineral (68) as it keeps iodine levels regulated in the thyroid (69). To date there is no research examining the effects of potassium iodide on athletic performance.

Sodium Selenite or Selenium as it is also known as is a chemical element that is best known for its antioxidant properties as it is the component of the antioxidant enzymes glutathione peroxidase and thioredoxin reductase (70). Selenium also plays a role in the functioning of the thyroid gland and in every cell that uses thyroid hormone (71). The thyroid gland controls how quickly the body uses energy, makes proteins, and controls how sensitive the body is to other hormones.

Biotin can also be know as vitamin B7 or Vitamin H. it has been found that it can contribute to metabolism and cell development (72) as well as providing energy during exercise (73).

With the vast amounts of ingredients within this supplement it can be easy to assume that it can live up to the claims that it can boost your daily intake of nutrients and minerals. However some ingredients within this supplement have no evidence that they can have any benefit. This product can be consumed at any point of the day. This product has no banned substances when referring to the WADA prohibited list when observing the label / ingredients posted on the website. 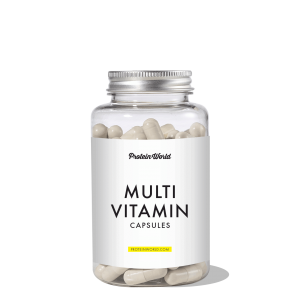