Growth Factor Mass Powder is produced by UK based PhD Supplements. This supplement states that it can help build serious muscle mass and increase explosive strength. This review will aim to see how this supplement can achieve this by looking at the ingredients.

Palatinose is also known as Isomaltulose and is a carbohydrate that is made from sucrose. The benefits of this form of carbohydrate is that it is slower to digest and provides a higher rate of fat oxidation than sucrose (4). By using palatinose instead of any other carbohydrate it can give an athlete a greater training adaptation as it can lead to a higher usage of the bodies own glycogen stores during exercise (5,6).

Fructose is a simple carbohydrate and is an intermediary in the metabolism of glucose (7). It has a low caloric value, low glycemic index (8) and gives a sweeter taste (9).

The reason for greater recovery of exercise can be due to a post exercise insulin response (18,19) which means glycogen resynthesis occurs rapidly so exercise can be prolonged, with greater training volume increased hypertrophy and decreased muscle damage.

Glutamine is a naturally non-essential neutral amino acid that helps with the transport of nitrogen between tissues. Heavy exercise has shown a reduction of glutamine in the blood (20). The amount of glutamine in the muscle is known to be related to the rate of protein synthesis (21) and glycogen synthesis (22) in the first few hours of recovery period of exercise.

Leucine is one of several Branched chain amino acids (BCAA’s). It is essential for protein synthesis which is stimulated after exhaustive exercise (27) as well as the critical metabolic process in muscle (28,29). The metabolic roles of Leucine include energy production and the modulator of muscle protein synthesis via the insulin signalling pathway. There is a reason to suggest that it helps maintenance of muscle mass during weight loss (30). Leucine has also been shown to help in the direct maintenance of glucose homeostasis by improving the redistribution of glucose via the glucose – alanine cycle (31).

Beta Alanine is a non-essential amino acid. In a wide range of studies beta – alanine has been shown to have benefits to high intensity exercise (32). The reason behind this is that it has been found to increase muscle carnosine concentrations (33). Carnosine is key to the intracellular PH buffering of skeletal muscle (34). With an increase in clearance of H+ ions, it leads to high intensity exercise lasting for longer.

Creatine monohydrate, (CM) is defined as a nitrogenous organic acid that occurs naturally in humans and aids in the supply of energy to cells in the body, (35). The majority of CM, 95%, can be located in the skeletal muscle with the rest distributed to the brain, heart and smooth muscles.

Creatine has been found to increase the replenishment of ATP stores in the skeletal muscles (36). It is attributed to a greater rate of phosphocreatine resynthesis during the rest periods. Higher sprint speeds reported (37). There have been numerous theories proposed as to why creatine is a benefit to short term high intensity exercise (38). One theory is that the increased amount of phosphocreatine, (PCr), can be used as an immediate buffer to ATP which reduces the dependence of glycolysis which delays the production of lactate and hydrogen ions during exercise thus prolonging the activity by delaying the onset of fatigue, (39).

Aspartic acid is a non-essential amino acid, and is a building block for proteins.
Calcium β-Hydroxy-β-Methyl-Butyrate Monohydrate (HMB)
Calcium is a vital part of dietary consumption in order to aid growth and maintenance of bones (40). Other important benefits of calcium include helping blood clotting (41), heart contractions (42), lungs (43) and muscles to function properly (44), this is due to calcium binding with phosphate to create calcium phosphate (45).

Oats have been suggested to be key to lowering cholesterol (49). Other beneficial effects that ground oats provide include a reduction in blood sugar levels, heart disease and type 2 diabetes, more research is needed however to elucidate these effects.

Pepper extract has numerous health benefits including helping with weight management by assisting with the breaking down and blocking the creation of fat cells (50), assisting with digestion by increasing hydrochloric acid within the stomach (51). In addition to this it is also an antioxidant in which it can reduce and repair the damage that free radicals cause after an intense workout (52).

L-valine is an amino acid which has been found to aid in the development of muscle growth (53) and tissue repair (54).

Isoleucine is a Branched chain amino acids (BCAA’s). They are essential for protein synthesis which is stimulated after exhaustive exercise (55) as well as the critical metabolic process in muscle (56, 57). The metabolic roles of Leucine include energy production and the modulator of muscle protein synthesis via the insulin signalling pathway. There is a reason to suggest that it helps maintenance of muscle mass during weight loss (58). Leucine has also been shown to help in the direct maintenance of glucose homeostasis by improving the redistribution of glucose via the glucose – alanine cycle (59).

Zinc Oxide is an inorganic compound. It has been identified as a factor for many enzymes responsible for the synthesis, storage and release of insulin (60), with increases in lean body mass while fat mass either remains stable or decreases, depending on the degree of baseline zinc deficiency (61). With this evidence is has been shown that this ingredient is important for the growth and development of body tissues as well as this a variety of biological processes including wound healing and muscle cramps (62) have been found.

The active form of vitamin B6 is known as P-L-P (69), which is stimulated by exercise (70). During exercise the body relies on the liver to produce glucose via glycogenolysis, for which vitamin b6 is essential for, and is an integral part of the glycogen phosphorylase enzyme and thus will provide energy to the bodies’ muscles (71).

Glycine is one of the components of creatine which helps increase muscle growth and energy during exercise (72). When metabolised it acts as an amino acid and regulates blood sugar levels which can also control that amount of sugar released into the blood (73).

Taurine is a semi essential amino acid that has been found to increase endurance performance; this has been attributed to an increase in blood flow (74). Taurine has also been found to help protect against cell damage which will help recovery after exercise, decreased oxidative stress in cardiac tissue (75) and increased fat oxidation (76).

Xanthan Gum is a water soluble dietary fibre, which have been reported to reduce total cholesterol; however there seems to be insufficient evidence to confirm this theory. (77)

Guar gum is a dietary fibre that has been reported to decrease plasma cholesterol concentration (78) and increased satiety (79). However a meta-analysis found that although this product is safe no benefit has been found compared to a placebo (80).

Sodium chloride is otherwise known as salt. It is theorised that sodium chloride can help prevent cramps as the key mechanism in muscle contraction is the flooding of the action potential in the muscle membrane, and so if there is a sodium deficiency it may cause the muscle to cramp (81).

The claims of this supplement are that it can improve explosive strength and build muscle mass. The ingredients within this product can help to achieve these goals due to the addition of whey protien and creatine monohydrate.

This supplement can also help aid cholesterol levels and has the potential to improve endurance performance. This supplement is recommended to be taken pre and post exercise. This product has no banned substances when referring to the WADA prohibited list when observing the label/ ingredients posted on the website.

63 – Ryan, M. F. (1991). The role of magnesium in clinical biochemistry: an overview.Annals of Clinical Biochemistry: An international journal of biochemistry in medicine, 28(1), 19-26. 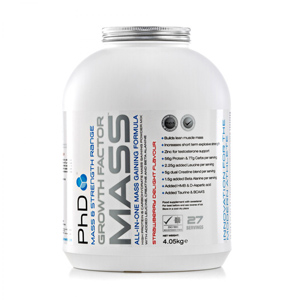