Vital Fabric is a supplement from Austrian based company Peeroton. Peeroton claims that this supplement strengthens bones, cartilage, tendons and muscles after exercise as well as accelerating regeneration after injury. This review will aim to assess the ingredients in this supplement to understand if and how it could achieve this.

Calcium carbonate is used as an acidity regulator, anticaking agent, stabiliser or colour.

Disodium phosphate is an inorganic compound which is used as a food additive that helps keep water based and oil based products mixed together that would normally separate.

Micro Crystalline Cellulose is a non-active ingredient which is made up of refined wood pulp. This substance doesn’t degrade during digestion and is preferable in tablets due to it being able to form hard but dissolve quickly.

Hydroxypropyl methylcellulose does not have any nutritional benefit as its main use is to protect nutrients from the bodies stomach acid.

Chondroitin sulfate is a chemical that is found in cartilage. It has been found that this chemical can help with individuals with arthritis by reducing pain and inflammation by preventing enzymes that break down cartilage (1).

Ferrous sulphate is also known as iron sulphate, common uses for this ingredient are for people with iron deficiency. Iron levels have been found to decline due to exercise (2) with findings showing that it can help with fatigue (3).

Cupric gluconate or copper gluconate as it is also called, has been suggested to contribute to the formation of red blood cells, healthy contribution to the growth and development of bones and organs as well as a participation in cholesterol and glucose metabolism (4). However although there has been evidence for this it is debated and others have found no change when administering copper gluconate compared to a placebo in healthy individuals (5, 6).

Maltodextrin is a polysaccharide which is a complex carbohydrate. This ingredient is water soluble and unlike other carbohydrates, is easily digestible (7) and can give a quick release of energy without any spikes of glycaemia (8).

Vitamin A is a diverse vitamin that has a wide range of functions. Vision improvement is one positive aspect of vitamin A supplementation (9), Another is bone and body growth which can be improved (10). Immune function is boosted by an increase of white blood cells which can destroy harmful bacteria (11). Epithelial cells require Vitamin A in order to function properly, these cells serve as barriers to infection by bacteria and other sources (12).

Glucosamine hydrochloride originates from seashells. The main function of this ingredient is that it aids in populations with arthritis and joints problems (13). This is due to this chemical making a cushion effect around the joint which protects it. There is insufficient evidence for this however and more studies are needed in order to fully determine its effects.

Zinc has been identified as a factor for many enzymes responsible for the synthesis, storage and release of insulin (14), with increases in lean body mass while fat mass either remains stable or decreases, depending on the degree of baseline zinc deficiency (15). With this evidence is has been shown that this ingredient is important for the growth and development of body tissues as well as this a variety of biological processes including wound healing and muscle cramps (16) have been found.

Calcium D-pantothenate (pantothenic acid) is otherwise known as vitamin B5 and is water soluble. This ingredient helps keep a healthy digestive tract (17) and uses vitamin B2 (18). Pantothenic acid has pantethine which has been found to lower cholesterol (19).

The active form of vitamin B6 is known as P-L-P (20), which is stimulated by exercise (21). During exercise the body relies on the liver to produce glucose via glycogenolysis, for which vitamin b6 is essential for, and is an integral part of the glycogen phosphorylase enzyme and thus will provide energy to the bodies’ muscles (22).

Riboflavin is a nutrient that has been found to help in fat metabolism via the electron-transport chain (23) and an antioxidant (24). It is also one of many nutrients that helps in the production of red blood cells. Levels of riboflavin has been found to diminish during exhaustive exercise (25).

Acacia is a water soluble dietary fibre, which have been reported to reduce total cholesterol; however there seems to be insufficient evidence to confirm this theory. (26)

Corn starch has no nutritional benefits as its function in supplements is to protect vitamins on their passage through the bodies stomach.

Folic acid is also known as folate is a water soluble mineral that, along with other nutrients is necessary for red blood cell production (27). It can also help regulate nitric oxide levels in the blood (28).

Biotin can also be know as vitamin B7 or Vitamin H. it has been found that it can contribute to metabolism and cell development (29) as well as providing energy during exercise (30).

Cholecalciferol is a form of Vitamin D and helps in the absorption of calcium in the stomach (37). Calcium is a vital part of dietary consumption in order to aid growth and maintenance of bones (31). Other important benefits of calcium include helping blood clotting (32), heart contractions (33), lungs (34) and muscles to function properly (35), this is due to calcium binding with phosphate to create calcium phosphate (36).

Research suggests that among the large number of ingredients within this supplement, many do back up the product’s claims of strengthening bones, cartilage and tendons. There is also some evidence to suggest that this supplement can aid recovery as well. This supplement should be consumed post-workout. This supplement has no banned substances when referring to the WADA prohibited list when observing the label/ingredients posted on the website. 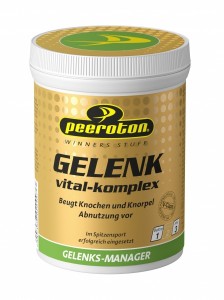