Matrix BCAA Amino Storm is a product from UK based company Matrix Nutrition. This product states that it can support recovery from intense workouts, protein synthesis and muscle mass development. This review will aim to examine the ingredients in this product to see if it can support the claims made.

L-tyrosine is an amino acid which has been found to help produce adrenaline (1) and dopamine (2).

Leucine, Isoleucine and Valine are all Branched chain amino acids (BCAA’s). They are essential for protein synthesis which is stimulated after exhaustive exercise (3) as well as the critical metabolic process in muscle (4,5). The metabolic roles of Leucine include energy production and the modulator of muscle protein synthesis via the insulin signalling pathway. There is a reason to suggest that it helps maintenance of muscle mass during weight loss (6). Leucine has also been shown to help in the direct maintenance of glucose homeostasis by improving the redistribution of glucose via the glucose – alanine cycle (7).

HMB or otherwise known as β-Hydroxy β-Methylbutyrate is a chemical component of leucine. HMB has been found to help reduce the breakdown of protein within the muscle (8, 9), however it seems to be less effective as leucine in protein synthesis (10). It is feasible to assume that HMB can help muscle wastage in athletes when they are in out of season, however more research is needed to understand this.

Creatine monohydrate, (CM) is defined as a nitrogenous organic acid that occurs naturally in humans and aids in the supply of energy to cells in the body, (11). The majority of CM, 95%, can be located in the skeletal muscle with the rest distributed to the brain, heart and smooth muscles.

Creatine has been found to increase the replenishment of ATP stores in the skeletal muscles (70). It is attributed to a greater rate of phosphocreatine resynthesis during the rest periods. Higher sprint speeds reported (12). There have been numerous theories proposed as to why creatine is a benefit to short term high intensity exercise (13). One theory is that the increased amount of phosphocreatine, (PCr), can be used as an immediate buffer to ATP which reduces the dependence of glycolysis which delays the production of lactate and hydrogen ions during exercise thus prolonging the activity by delaying the onset of fatigue, (14).

Glutamine is a naturally non-essential neutral amino acid that helps with the transport of nitrogen between tissues. Heavy exercise has shown a reduction of glutamine in the blood (15). The amount of glutamine in the muscle is known to be related to the rate of protein synthesis (16) and glycogen synthesis (17) in the first few hours of recovery period of exercise.

L-Lysine is an essential amino acid which has been found to aid in the increase of muscle mass (18) and helps in the absorption and metabolism of calcium (19).

Taurine is a semi essential amino acid that has been found to increase endurance performance; this has been attributed to an increase in blood flow (20). Taurine has also been found to help protect against cell damage which will help recovery after exercise, decreased oxidative stress in cardiac tissue (21) and increased fat oxidation (22).

Glycine is one of the components of creatine which helps increase muscle growth and energy during exercise (23). When metabolised it acts as an amino acid and regulates blood sugar levels which can also control that amount of sugar released into the blood (24).

The main function of citric acid is the reduction of physical fatigue (25). The reason for this is due to citric acid being a major component of the tricarboxylic acid (TCA) cycle. TCA cycle is the process of converting carbohydrates, fats and proteins into carbon dioxide and water (26). By increasing citric acid it activates the TCA cycle and in turn speeds up ATP production thus replenishing energy.

Maltodextrin is a polysaccharide which is a complex carbohydrate. This ingredient is water soluble and unlike other carbohydrates, is easily digestible (27) and can give a quick release of energy without any spikes of glycaemia (28).

This product contains ingredients that can help with recovery, muscle gain as well as this it will help increase the amount of energy available during workouts. This product should be consumed  during and or post workout. This product has no banned substances when referring to the WADA prohibited list when observing the label / ingredients posted on the website. 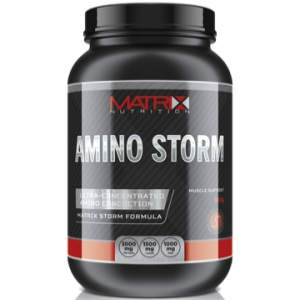