Body ‘n Diet is from German Based company ironmaxx.de. This product claims that it can act as a meal replacement and help to lose weight. This review will examine the ingredients in this product to understand if it can achieve the claims.

Glutamine is a naturally non-essential neutral amino acid that helps with the transport of nitrogen between tissues. Heavy exercise has shown a reduction of glutamine in the blood (11). The amount of glutamine in the muscle is known to be related to the rate of protein synthesis (12) and glycogen synthesis (13) in the first few hours of recovery period of exercise.

Leucine, Isoleucine and Valine are all Branched chain amino acids (BCAA’s). They are essential for protein synthesis which is stimulated after exhaustive exercise (17) as well as the critical metabolic process in muscle (18, 19). The metabolic roles of Leucine include energy production and the modulator of muscle protein synthesis via the insulin signalling pathway. There is a reason to suggest that it helps maintenance of muscle mass during weight loss (20). Leucine has also been shown to help in the direct maintenance of glucose homeostasis by improving the redistribution of glucose via the glucose – alanine cycle (21).

Dextrin is a polysaccharide which is a complex carbohydrate. This ingredient is water soluble and unlike other carbohydrates, is easily digestible (22) and can give a quick release of energy without any spikes of glycaemia (23).

Beetroot juice powder is a different form of beetroot juice which are dried and processed to form concentrated powder. Beetroot juice includes nitrate (30) which converts into nitric oxide which can increase blood flow in the muscle (31). Another suggested mechanism is that nitric oxide acts as an electric transporter within the muscle which aids in the same way oxygen does (32). Other effects include a lower oxygen demand during submaximal work (33). It is also known to be an antioxidant (34).

L-Carnitine is a dipeptide made from the essential amino acids lysine and methionine. L-Carnitine plays an important role in fat metabolism by allowing long chained fatty acids to pass through the mitochondrial membrane (35, 36).

L-tartrate is a form of L-carnitine. L-Carnitine is a dipeptide made from the essential amino acids lysine and methionine. L-Carnitine plays an important role in fat metabolism by allowing long chained fatty acids to pass through the mitochondrial membrane (37, 38).

Xanthan Gum are water soluble dietary fibres, which have been reported to reduce total cholesterol; however there seems to be insufficient evidence to confirm this theory. (39)

Ferrous fumarate is also known as iron sulphate, common uses for this ingredient are for people with an iron deficiency. Iron levels have been found to decline due to exercise (46) with findings showing that replacing iron can help with fatigue (47).

Zinc has been identified as a factor for many enzymes responsible for the synthesis, storage and release of insulin (48), with increases in lean body mass while fat mass either remains stable or decreases, depending on the degree of baseline zinc deficiency (49). With this evidence is has been shown that this ingredient is important for the growth and development of body tissues as well as this a variety of biological processes including wound healing and muscle cramps (50) have been found.

Manganese Aspartate is a mineral that has been found to activate enzymes that are vital for such other ingredients including Biotin, Thiamine and Ascorbic Acid (51). Manganese Aspartate has also been found to help synthesis fatty acid and cholesterol (52), whilst playing a key role in skeletal maintenance however more research is needed to fully elucidate these effects.

copper gluconate has been suggested to contribute to the formation of red blood cells, healthy contribution to the growth and development of bones and organs as well as a participation in cholesterol and glucose metabolism (53). However although there has been evidence for this it is debated and others have found no change when administering copper gluconate compared to a placebo in healthy individuals (54, 55).

Potassium iodide is known as a thyroid mineral (56) as it keeps iodine levels regulated in the thyroid (57). To date there is no research examining the effects of potassium iodide on athletic performance.

Sodium selenite or otherwise known as selenium is a chemical element that is best known for its antioxidant properties as it is the component of the antioxidant enzymes glutathione peroxidase and thioredoxin reductase (58). Selenium also plays a role in the functioning of the thyroid gland and in every cell that uses thyroid hormone (59). The thyroid gland controls how quickly the body uses energy, makes proteins, and controls how sensitive the body is to other hormones.

Lactic acid bacteria is a probiotic. The health benefits of this ingredient includes regulating bowel movement which prevents diarrhea, lowering cholesterol and gives a boost to the immune system (60).

Omega 3 is a polyunsaturated fatty acid which include numerous health benefits such as lowering blood pressure (61), lowering cholesterol (62) and also plays a role in reducing oxidative stress which leads to reducing cardiovascular disease (63).

Honey powder does not have any nutritional benefits and is used in supplements as a thickener and for flavouring.

Yogurt powder does not have any nutritional benefits and is used in supplements as a thickener and for flavouring.

MCT is known as medium chain triglyceride. It has been suggested that it can aid fat burning which will help weight loss (64), however this has been disputed (65) and more research is needed to fully elucidate these findings.

Inulin is a polysaccharide which is a complex carbohydrate. This ingredient is water soluble and unlike other carbohydrates, is easily digestible (66) and can give a quick release of energy without any spikes of glycaemia (67).

Ascorbic acid or vitamin C is known to be a powerful antioxidant (68). Studies have suggested that it can increase endothelial nitric oxide by protecting it from oxidation and increase synthesis, another function that Vitamin C has suggested includes reducing blood pressure (69), however the only proven function of vitamin C is the prevention of scurvy (70)

tocopheryl acetate is otherwise known as vitamin E and is an antioxidant (71). This means that it protects the muscles from free radicals, which causes muscle soreness and damage to the muscle tissue and fat cells (72). Dl-alpha tocopheryl acetate can counteract these free radicals before damaging these parts of the body which can allow exercise to be prolonged (73).

Nicotinamide is also known as niacin or vitamin B3 and in an antioxidant. Research studies have shown that niacin supplementation increases growth hormones in response to anaerobic exercise (74) as well as a reduction in fasting triglycerides (75). An increase in fasting insulin has been found due to a decrease in insulin sensitivity (76). Further research is needed for this supplement in order to understand the mechanisms.

Retinyl acetate is the natural form of Vitamin A. Vitamin A is a diverse vitamin that has a wide range of functions. Vision improvement is one positive aspect of vitamin A supplementation (77), Another is bone and body growth which can be improved (78). Immune function is boosted by an increase of white blood cells which can destroy harmful bacteria (79). Epithelial cells require Vitamin A in order to function properly, these cells serve as barriers to infection by bacteria and other sources (80).

Calcium D-pantothenate (pantothenic acid) is otherwise known as vitamin B5 and is water soluble. This ingredient helps keep a healthy digestive tract (81) and uses vitamin B2 (82). Pantothenic acid has pantethine which has been found to lower cholesterol (83).

Cyanocobalamin is also known as Vitamin B12. Research studies on vitamin B12 have found that it is required for red blood cell production (84), protein synthesis and the repair and maintenance of tissue cells (85).

Pyridoxine hydrochloride is a form of Vitamin B6. The active form of vitamin B6 is known as P-L-P (86), which is stimulated by exercise (87). During exercise the body relies on the liver to produce glucose via glycogenolysis, for which vitamin b6 is essential for, and is an integral part of the glycogen phosphorylase enzyme and thus will provide energy to the bodies’ muscles (88).

Riboflavin is a nutrient that has been found to help in fat metabolism via the electron-transport chain (89) and an antioxidant (90). It is also one of many nutrients that helps in the production of red blood cells. Levels of riboflavin has been found to diminish during exhaustive exercise (91).

Thiamine is also known as vitamin B1 (92) and is essential in carbohydrate metabolism and oxidation (93). The reported effect that have been found includes, a decrease in heart rate, blood glucose and lactate concentrations (94).

Folic acid is also known as folate is a water soluble mineral that, along with other nutrients is necessary for red blood cell production (95). It can also help regulate nitric oxide levels in the blood (96).

Biotin can also be know as vitamin B7 or Vitamin H. it has been found that it can contribute to metabolism and cell development (97) as well as providing energy during exercise (98).

Cholecalciferol is a form of Vitamin D and helps with the absorption of calcium in the stomach (99). Calcium is a vital part of dietary consumption in order to aid growth and maintenance of bones (100). Other important benefits of calcium include helping blood clotting (101), heart contractions (102), lungs (103) and muscles to function properly (104), this is due to calcium binding with phosphate to create calcium phosphate (105).

The main function of citric acid is the reduction of physical fatigue (106). The reason for this is due to citric acid being a major component of the tricarboxylic acid (TCA) cycle. TCA cycle is the process of converting carbohydrates, fats and proteins into carbon dioxide and water (107). By increasing citric acid it activates the TCA cycle and in turn speeds up ATP production thus replenishing energy.

Beta Carotene is a red / orange pigment that is derived from root vegetables such as carrots. Beta Carotene has been found to convert into Vitamin A (108). Vitamin A is a diverse vitamin that has a wide range of functions. Vision improvement is one positive aspect of vitamin A supplementation (109), another is bone and body growth which can be improved (110). Immune function is boosted by an increase in white blood cells which can destroy harmful bacteria (111). Epithelial cells require Vitamin A in order to function properly, these cells serve as barriers to infection by bacteria and other sources (112). An advantage of Beta Carotene is that the body only converts as much as is required.

With the plethora of ingredients that this supplement product has it can achieve not only weight loss, but muscle gain, with the inclusion of whey, soy and egg protein as well as an antioxidant with the wide variety of vitamins. This product is not recommended as a meal substitute. It is recommended to be taken at any time during the day. This product has no banned substances when referring to the WADA prohibited list when observing the label / ingredients posted on the website.

40 – Ryan, M. F. (1991). The role of magnesium in clinical biochemistry: an overview.Annals of Clinical Biochemistry: An international journal of biochemistry in medicine, 28(1), 19-26. 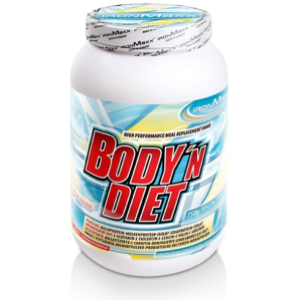