ZMA 24 Hour is a product from UK based company Applied Nutrition. This product states that it can contribute to normal testosterone levels and the immune system. This review will aim to examine the ingredients in this product to see if it can support the claims made.

For many years caffeine has been a widely used as an ergogenic aid. There have been many studies of caffeine’s effect of both the aerobic system, (7), and the anaerobic system, (8) on sporting performance. The suggested benefits of caffeine supplementation include the ability to attain greater use of fats as an energy source and sparing of muscle glycogen, (9). It has also been suggested that there is an increase of calcium release from the sarcoplasmic reticulum, which can create a greater muscle force production, (10). It has also been theorised that the effects of caffeine are probably exerted through effects upon the central nervous system or skeletal muscle by greater motor unit recruitment and alterations in neurotransmitter function (11).

Zinc is an inorganic compound. It has been identified as a factor for many enzymes responsible for the synthesis, storage and release of insulin (12), with increases in lean body mass while fat mass either remains stable or decreases, depending on the degree of baseline zinc deficiency (13). With this evidence is has been shown that this ingredient is important for the growth and development of body tissues as well as this a variety of biological processes including wound healing and muscle cramps (14) have been found.

The active form of vitamin B6 is known as P-L-P (15), which is stimulated by exercise (16). During exercise the body relies on the liver to produce glucose via glycogenolysis, for which vitamin b6 is essential for, and is an integral part of the glycogen phosphorylase enzyme and thus will provide energy to the bodies’ muscles (17).

Micro Crystalline Cellulose is a non-active ingredient which is made up of refined wood pulp. This substance does not degrade during digestion and is preferable in tablets due to it being able to form hard but dissolve quickly. 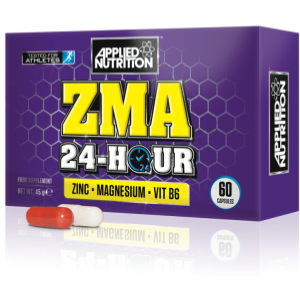